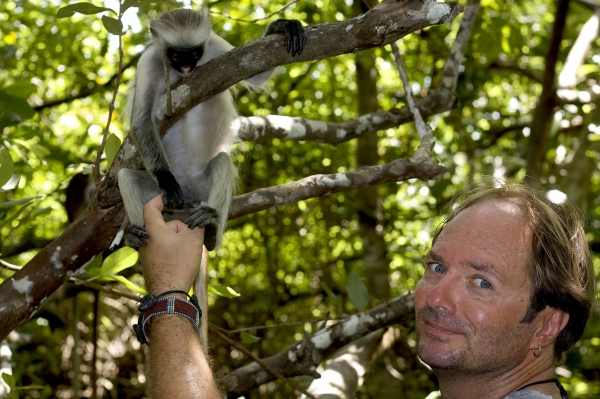 I have been in the forest already several hours, busy photographing a group of Red Colobus - highly endangered species. I was lucky that these monkeys descended to my level for a rest and to digest their meal of leaves. There they were, all around, lying on the surrounding branches, in twos, in threes. The atmosphere was peaceful. I move back discretly to expand my framing. After several minutes, in "motionless action", I felt on my shoulder a gentle, short pressure ... I deliberately ignored it! But at the fourth time, keeping my compose, I turned calmly and found myself face to face with this young she-monkey. Our glances met, sweet and intense. However, I continued to focus on my photo shoot with the other older members of the group, ignoring all her repeated gestures. Then I felt again the pressure of her hand... a bit more insistente but still soft. So, I turned around and offered mine to her ... without touching her. And then! She took my forefinger with her right hand and put her two feet on either side of mine. She was surprised, inquisitive but also very observant... She was trying to understand. The time had stopped. A deep feeling took hold of me ... There was a magical moment of great tenderness between her and me, engraved forever on my memory. We were in unison!

More in this category: « PHOTO CHOC Out of Safari »
back to top